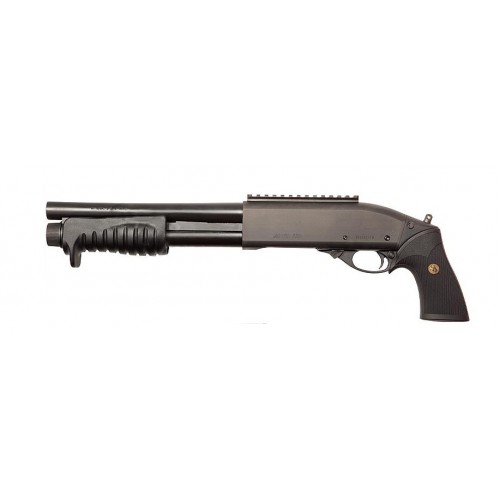 One of the most iconic guns in the world is the Remington M870 shotgun - the infamous sound of racking the action screams "GET OFF MY LAWN", and has been touted as a huge psychological deterrent. In movies, especially for henchmen, that noise also punctuates every phrase/sentence!

In airsoft terms, shotguns exist in a weird space. They've never really been a gun of practicality, but rather of love. They're damned cool, and as such people want to use them. However, this gun serves to break the mould; not only is the M870 breacher awesome, it is arguably the most practical shotgun made to date.

Gas powered, this shotgun is shell-fed (from shell type magazines; the shotgun holds 1x 30 round shell), but is not shell ejecting. It is selectable between tri or six shot modes, and easily done - just pump the action to the rear, and there is a selector switch visible from the breach.

Now, you might be thinking that this is something all of Tokyo Marui's gas shotguns do, and you're right. However, what the breacher offers is a compact package, with the easiest to change gas tank of them all. It is shaped like a pistol magazine, and detaches easily from the bottom at the push of a button; no covers to mess with (or potentially lose)